Data Workflow (Sandboxing) requires that a user be able to make a change to a sandboxable entity and have those changes isolated to an individual instance that only that user can see. Furthermore, promotion workflows require that a user be able to promote a change forward into one or more approval views that possibly have visibility to multiple users. As a result, approval sandboxes contained merged results of work from multiple users and employ an optimistic strategy where the last change wins, rather than locking records. Merging of changes are performed on a field-by-field basis, rather than an entire entity.

Users may revert changes made in the user’s sandbox. Approvers may reject changes made in an approval sandbox, which results in one or more changes being moved backwards in the workflow - possibly all the way back to the originating user.

Users capable of scheduling deployments may do so once the change has passed all approval gateways. Scheduling for deployment may be immediate, or may be set for a future date/time.

DefaultTrackableDomainMapperMemberSupport manages the sandbox and catalog state during CRUD operations on Trackable entities:

DefaultTrackableDomainMapperMemberSupport is also responsible for maintaining audit information on changes detected during CRUD operations. ChangeDetail instances represent a change made by the user and are stored in the Trackable entity’s change details. 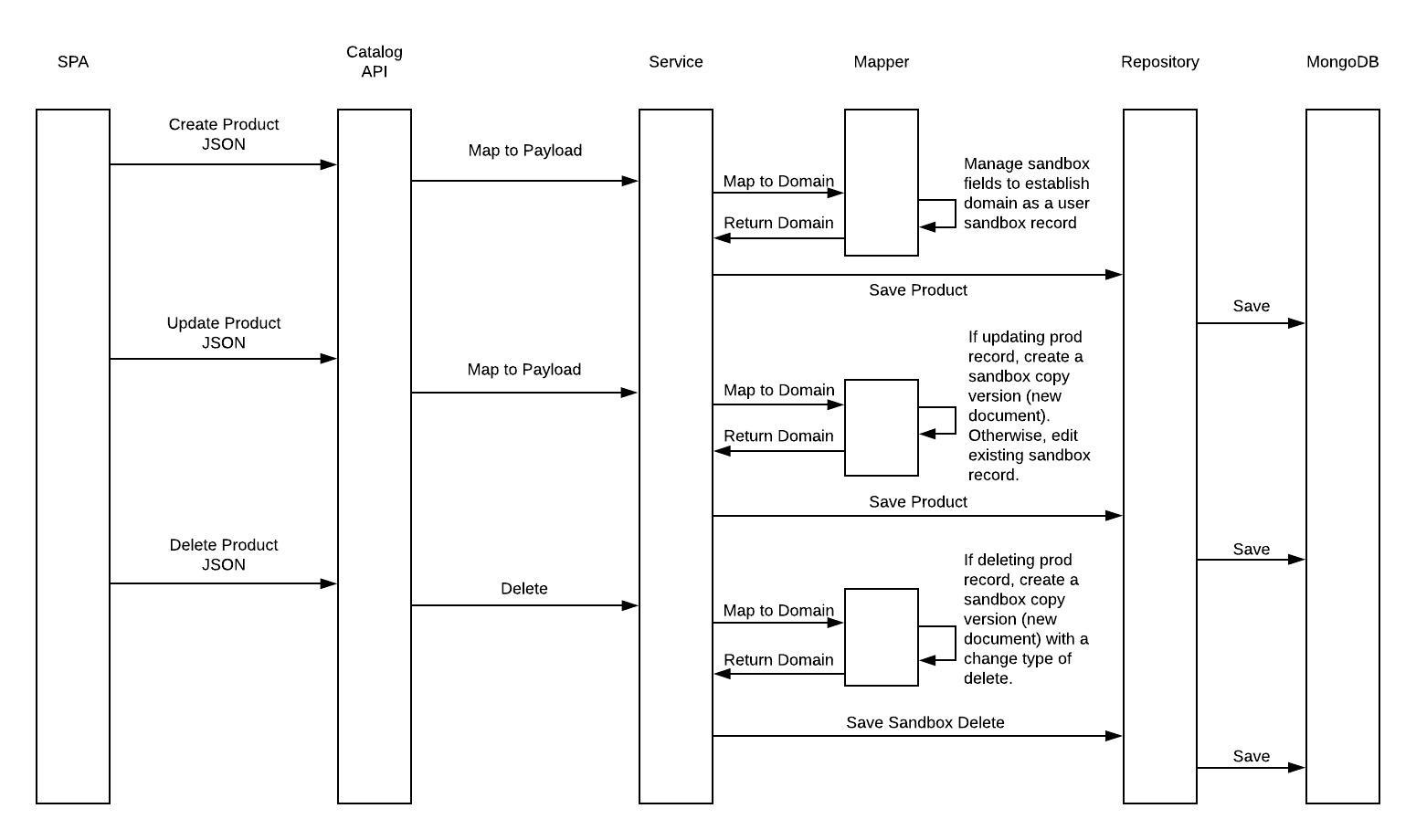 Narrowing is accomplished by including an additional Narrow annotation to an interface repository definition extending from TrackableRepository. Narrow annotations take a required NarrowExecutor class argument. The NarrowExecutor is responsible for executing the fetch query defined by the repository query method (or by direct Query definitions through repository specific helper - for example - JpaNarrowingHelper). Furthermore, it is responsible for possibly enhancing the query to perform additional filtering, such as sandbox narrowing and/or catalog filtering.

Benefits of this model

Promotion is the mechanism by which user sandbox state changes are moved to higher visibility levels, until the changes are eventually promoted to the production record. Presumably, at each stage, the change is available for review and may be advanced or rejected (usually via the admin tool). WorkflowTransitionHelper is responsible for executing the promotion steps and is capable of mapping ChangeDetails from the original user change and applying those changes to another version of the record with higher visibility in the same sandbox. The highest level promotion (referred to as a deployment) occurs when WorkflowTransitionHelper applies ChangeDetails to an existing production record, or in the case of an ADD, creates a new production record.

Promotion is only one type of transition available. Sandbox state can also be transitioned backward for unwanted changes, or changes requiring further edits. The revert transition can be used to undo a user level change, which completely removes the change from the system. An approval level user can reject a promoted change, send the change back to the author for further edits.

Catalogs allow grouping of items under a common label. It is commonly used by merchandisers to represent how products are distributed across store and channels. For example, it is common to have catalogs by region as a vehicle for defining how stores in different localities are merchandised differently. This is often thought of as products, but can be any piece of data in the catalog service that is influenced by your catalog partitioning scheme.

Propagation occurs at the time of deployment and involves taking the deployed ChangeDetails and applying those changes to more derived versions of the record in child catalogs. At this point, the notion of collision detection becomes important. If the more derived version of the record in the child catalog contains pre-existing changes on one or more of the fields in the propagating ChangeDetails, this is considered a collision and that individual change is not advanced further, while other non-colliding changes are allowed to continue to trickle down.